You are currently browsing the monthly archive for September 2010.

How does a self-managed and self-organized team coordinate holidays and other planned absences? It doesn’t need to be more complicated than a Team Calendar. Print a blank monthly calendar on an A4 sheet of paper (you can do this from Outlook, or if you want to go fancy, Visio) and put it on the taskboard. Team members write their name on the days they will be out of office. 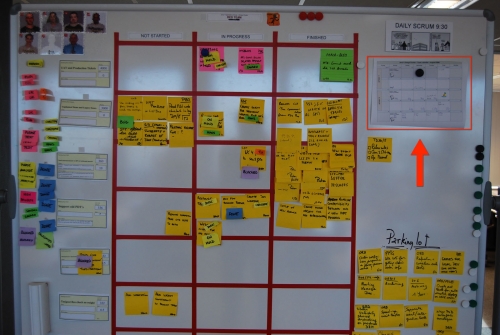 (Click to zoom on the pictures) The team calendar is also a good place to write down any team events, indicate start and end of sprints, etc. This closeup of the calendar below shows which 2-week sprints the team will be doing during the month. It also indicates the day they demo and plan (every two mondays) and there is a national holiday indicated by the little island icon. 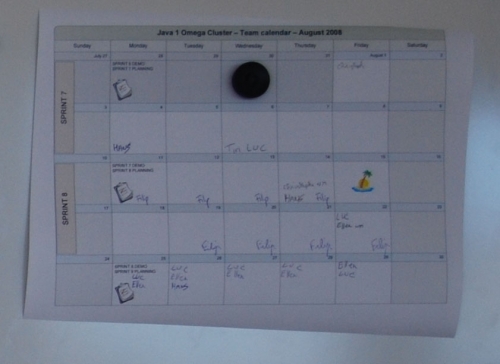 As you approach the end of the month, you probably want to put up next month’s calendar on the board, at the same time as the current month.

Visual Management for having a baby 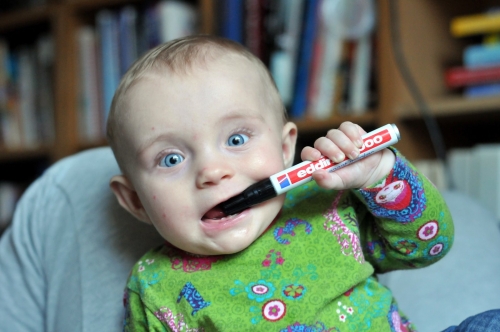 Hello! I am Laura Quesada Allue. I was born in January 2010. Maybe you were wondering why my daddy hasn’t written anything on this blog for the last 8 months? Well, now you know!

This blog post tells the story of how my parents used Visual Management to coordinate the tough project of preparing themselves for my coming to the world. I leave you with them now…

When we learned we were going to be parents, the first thing we did was to think about the main characteristics and constraints of this project.

Based on these characteristics, we chose the following Visual Management strategy:

Note: you can click on all the pictures for a high-resolution version. 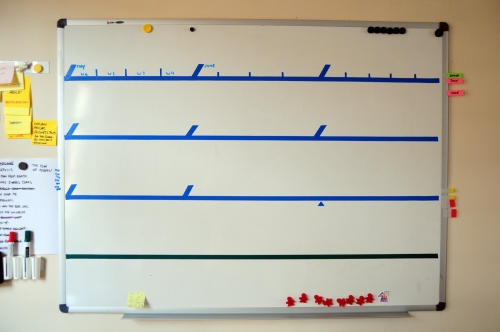 The timeline represents the 9 months of pregnancy (blue lines) and the first 3 months of Laura’s life (green line). We didn’t know if we would need the green line, but we had space left over so we put it in anyways. 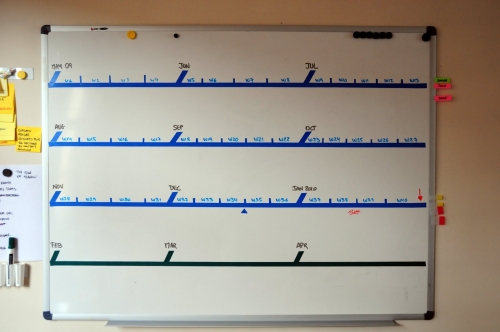 We wanted to visualize calendar months and pregnancy weeks at the same time, because certain tasks or events are commonly associated with the week number, while months gave us the big picture. 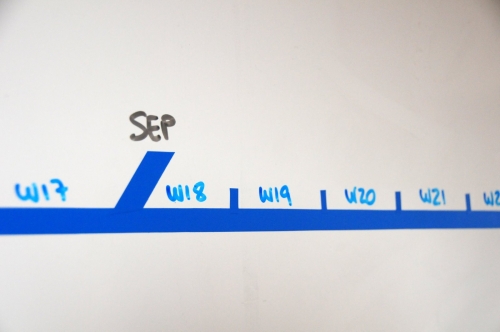 A detail of months and weeks. What you see in blue is all electrical tape. 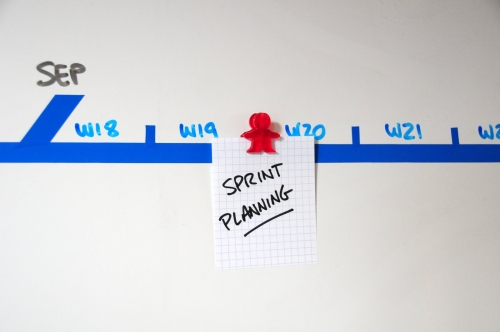 We got these cute clip magnets at XP Days Benelux; they would come in handy. 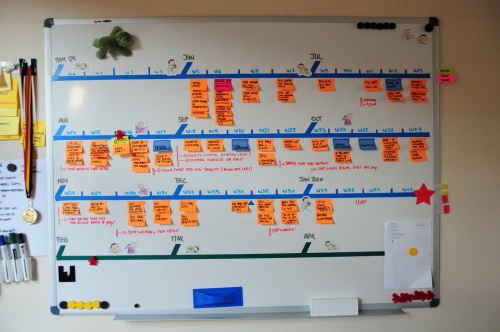 This is how the board looked when we got started, in week 5 (June 2009). The board was populated with all tasks and information we had at the moment: our initial planning. We adorned the board with some cute baby-themed magnets we got from cousin Flo. Tufte would not like them, they were pure decoration. 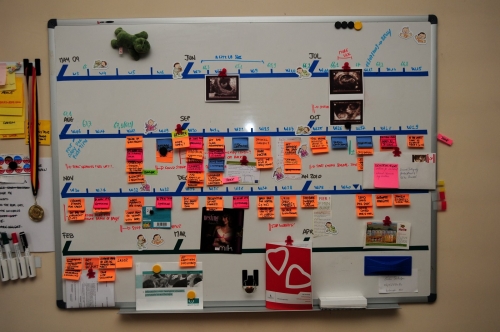 Once the project got underway, the following activities were typical: 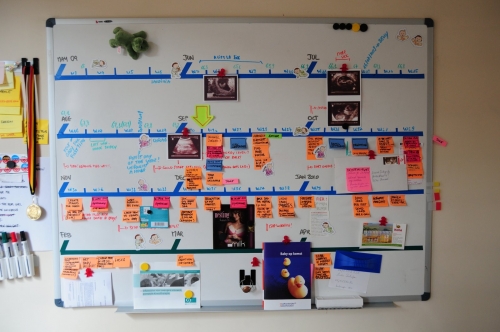 We would regularly make small improvements to the board. For example we added a green “you are here” arrow. Some people asked us what the board was about, so we added the title “Baby Board”. 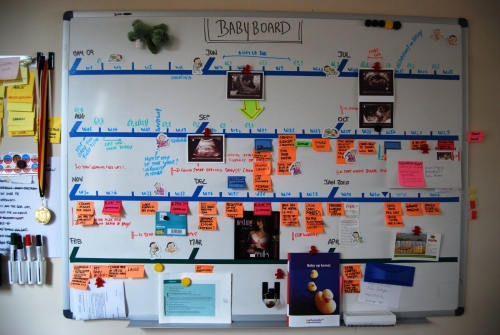 The board was both an effective planning tool for the future, and a living recount of the past. 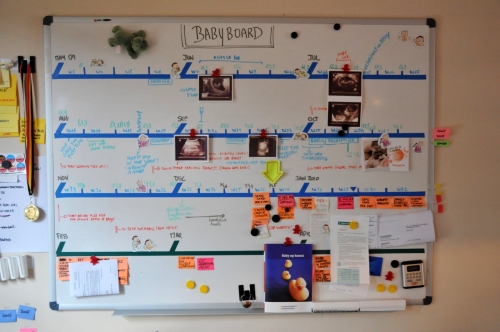 You can see that as the green arrow moves along, the post-its disappear with it. The fact that post-its were not accumulating further down the line meant we were proceeding at a good pace. If we would notice a cluster of orange tasks accumulating, we would know we were behind schedule and would react by putting in more time, or dropping requirements. 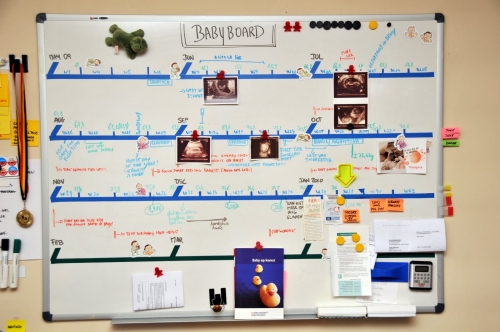 Finally the date was approaching! We knew the project would be a success because almost all our tasks were done. 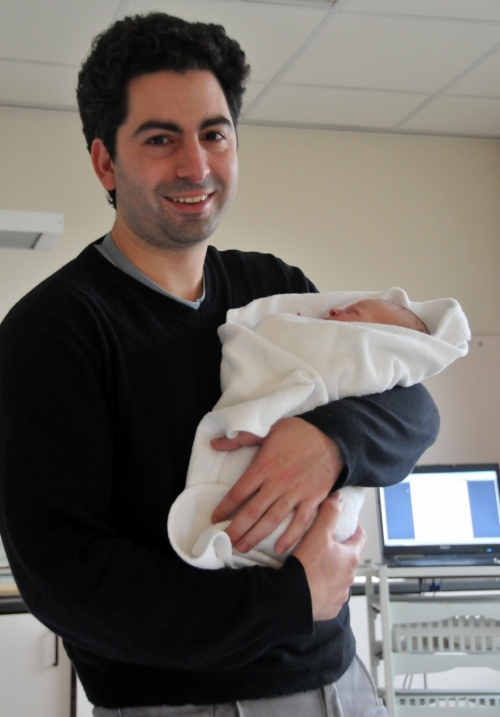 The release to production took 11 hours, and was quite tough for one of the team members (guess which one)… but eventually it was successful and the project went -very literally- live. Welcome, Laura! 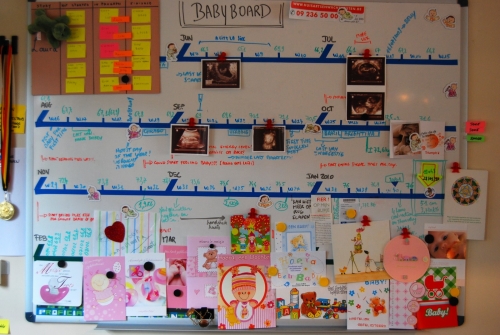 In Belgium, people exchange cards when a baby is born. As cards started to arrive, we put them on the taskboard, turning it into a “celebration” board. 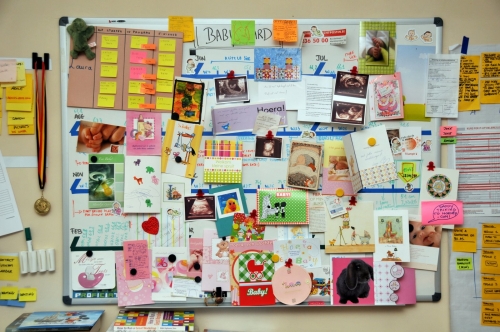 At the end, we almost didn’t have enough room! One of the best cards we got was a mini-taskboard baby card from one of the teams we coached. Thanks guys! 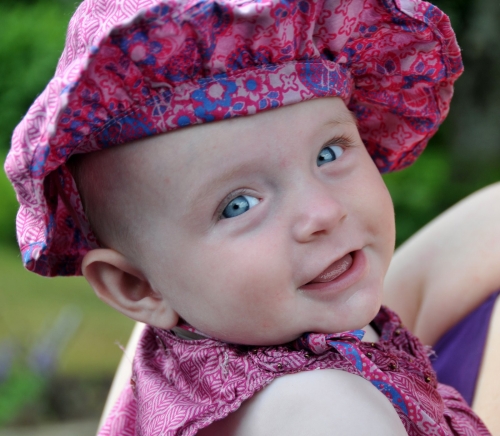 To close, a big smile from Laurita dedicated to all the friends in the international Agile community. Isn’t she cute?